Plants of Mauritius: a Tour of SSR Botanical Garden 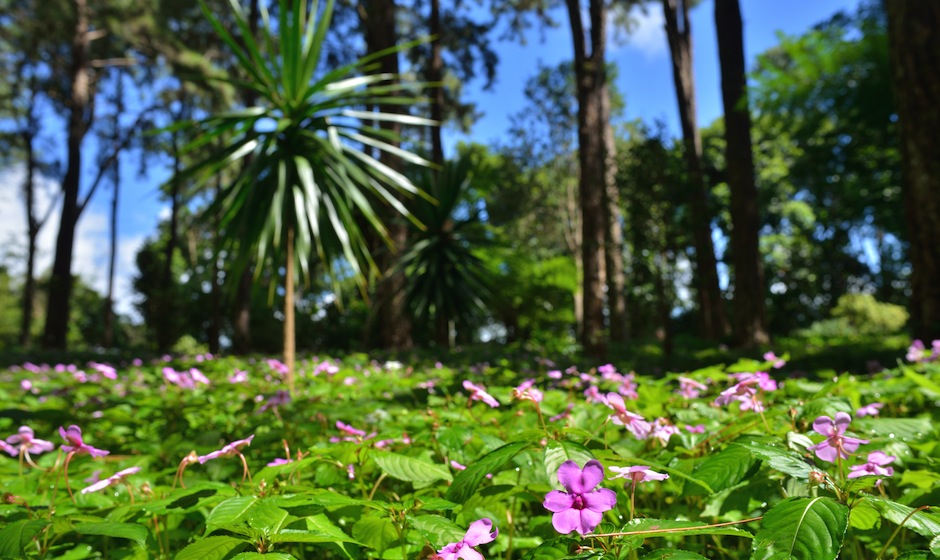 The Sir Seewoosagur Ramgoolam Botanical Garden – often shortened to SSR and still widely known as the Pamplemousses Botanical Garden – is the oldest such garden in the southern hemisphere, with 37 nature-packed hectares of tropical plants, shrubs, trees and blooms.

Renowned across the world for its beautiful long pond of giant water lillies, the garden began life in 1735 as a vegetable plot belonging to French naval officer La Bourdonnais. It was then more formally laid out in 1768 by French horticulturist and missionary Pierre Poivre, who was also responsible for introducing spices such as clove and nutmeg to Mauritius, Reunion and the Seychelles. With the trade in these commodities entirely controlled by the Dutch at the time, Poivre arranged secret smuggling sorties to obtain plants and seeds from the East Indies during 1769 and 1770, bringing them back to cultivate in the Indian Ocean.

Today, the garden still thrives and remains one of the most popular tourist attractions in Mauritius. The 37 flourishing hectares are full of tropical plants, rare shrubs and unusual trees, many of which were imported from Africa, Asia, the Americas and other islands of the Indian Ocean. We take a look at some of the most interesting species to look out for during your visit. 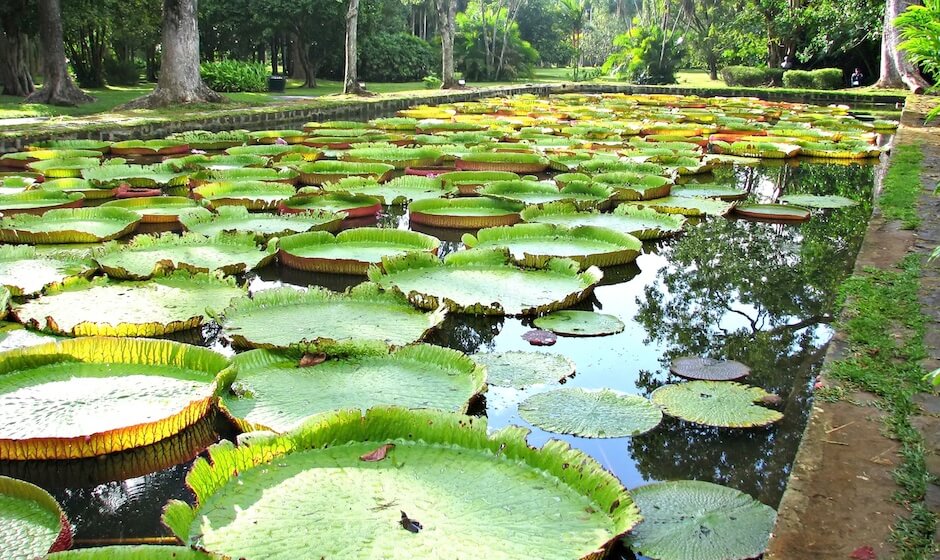 The above-mentioned lily pond is Pamplemousses’ crowning glory, and the giant lillies within it are the largest of the Nymphaeaceae family of flowering water lillies, with leaves up to 3 metres in diameter.

Native to the Amazon River basin, the complex and sophisticated flowers emerge as white on their opening night, but will have changed to pink by the next evening. It’s said this stunning bloom was architect Sir Joseph Paxton’s original inspiration for London’s Crystal Palace, an elaborate Victorian exhibition building destroyed by fire in 1936. 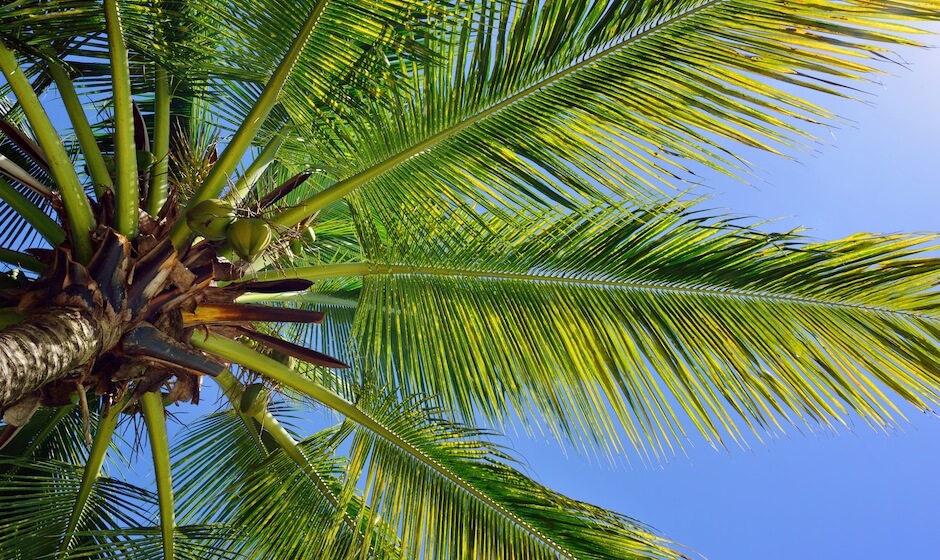 Native to Sri Lanka and the Malabar coast of India, the fascinating talipot palm is one of the largest in the world, often reaching heights of up to 25 metres. This ‘fan palm’, with its 5 metre diameter leaves can feature up to several million tiny flowers on one branched stalk which forms at the top of its trunk – a phenomenon known as ‘inflorescence’.

The tree is also monocarpic, which means it flowers only once in its lifetime, between 30 and 80 years old. Following the flowering, the palm produces thousands of yellowy-green grape-like clusters of fruit which can take up to a year to mature – and then dies shortly after. The handsome and abundant jackfruit tree produces a widely-consumed fruit popular throughout the tropical regions of India, Southeast Asia, Brazil, the Caribbean and parts of Africa including Madagascar and Mauritius.

The jackfruit is the largest tree-borne fruit, sometimes growing up to 35kg in weight, and as the fruits hang in close-knit bunches which fall naturally to the ground, they have the potential to be fairly hazardous in populated areas. Once ripened, the unopened jackfruit has a distinctively sweet odour, and inside the tough exterior are many starchy seeds encased in an aromatic flesh which tastes like a cross between pineapple, mango and banana. 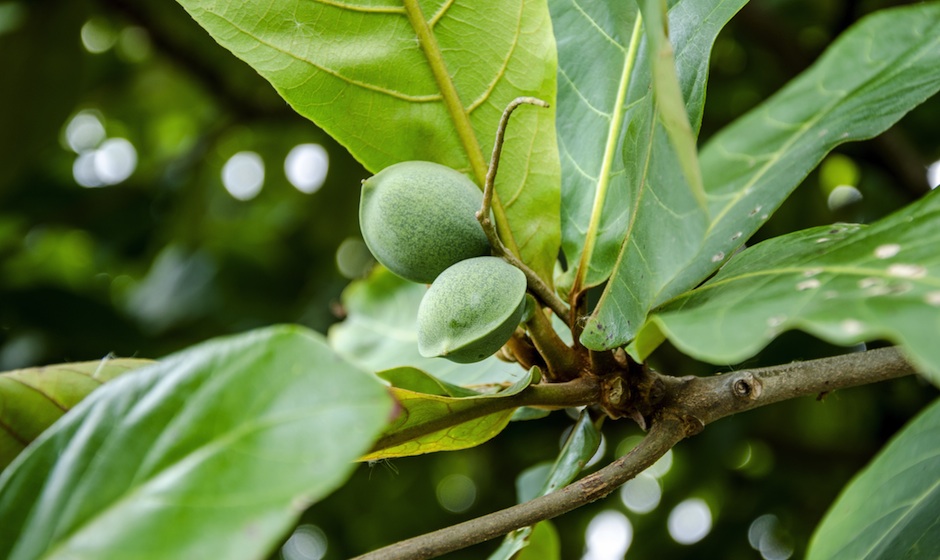 Also known as the Bengal almond, tropical almond and Malabar almond, the Indian Almond is a very tall, upright tree with a characteristic pagoda shape, which grows mainly in the tropical zones of Asia, Australia and Africa.

Mostly cultivated as an ornamental tree, the large leaves turn from a rich glossy green to a pinky red, and are often used for medicinal purposes as they contain several flavonoids said to be helpful for treating liver disease and other ailments. The almond-shaped fruits turn purply brown when ripe, and unlike the commercial almond are edible when raw, though despite this it can be difficult to remove the flesh away from the stone. Oil for cooking can also be extracted from the nuts when dried.

To make the most of your visit to SSR Botanical Garden, official guides can be hired to highlight and share their knowledge of these and other intriguing species throughout the grounds.