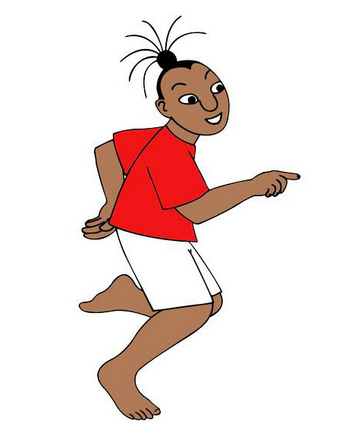 He’s the barefoot, dreadlocked, wildly popular star of his very own series of escapades, beloved by an entire generation of Mauritian children and their families.

Yet Tikoulou had existed in the mind and pen of Mauritian illustrator Henry Koombes long before he became the instantly recognisable hero he is today. For several years, the character was drawn, named and virtually fully formed, but Koombes had no idea what to do with him. He was just a little 10 year old Creole boy with nowhere to go and nothing to do.

Then along came publisher Pascale Siew, who shared Koombes’ desire to enable children to develop a connection to their own culture and to communicate certain values while encouraging them to read. And she also saw Tikoulou’s potential as a truly Mauritian children’s icon – after all, these stories would be written and illustrated by Mauritians, for Mauritians, about Mauritius.

And so The Adventures of Tikoulou were born.

The young hero’s character traits reflect that of the illustrator. 'I always loved reggae music and Rasta culture,' says Henry Koombes. 'As a child, just like Tikoulou, I ran around barefoot, in fields or on the beach. I also chose his name from a Creole saying that goes ‘Piti mé koulou’ (small but strong).'

The Tikoulou collection numbers 14 storybooks illustrated in a visually appealing, folkloric style, where our inventive, curious character delves into adventures in Black River, at the Citadel, the sugar factory and at sea – as well as Rodrigues, Seychelles, Reunion, Madagascar and as far afield as India.

Mauritian traditions also feature strongly, with books based around seasonal activities like sugar cane cutting and events like the Grand Gaube regatta and the Maiden Cup horse race. But regardless of the tale, each of these stories relates the value of friendship, a respect for nature, solidarity and tolerance.

Over time, Tikoulou has gathered together a band of friends with the same inquisitive outlook as his own: cousin Gromarto, his buddies Matapan and Kasskott, and an entire family inspired by characters from local folklore. His universe is set among colourful flora and fauna, with his loyal dog Dimoune, mocking monkeys and, of course, a small dodo that appears from time to time.

To Henry Koombes, the experience was enriching and creative: 'Tikoulou was born 15 years ago and I think his character is still as refreshing as ever,' he says. 'Just like him, I had a free childhood and played traditional games – elastics (a roll of elastic bands tied together to form a ball), sirandanes (riddles) – all of which I’m passing on to my character.'

After the success of the first storybook, In the Land of the Dodo, the series invited many different writers to contribute, including Alain Gordon-Gentil, Monique Ritter and Joëlle Écormier, among others. The next book is currently in progress, based around a story written by Mauritian-French author Natacha Appanah, but as Pascale Siew explains: 'Tikoulou has a visual identity above all. Henry’s world dominates the story in each album.'

In 2014, Tikoulou will find his way onto the stage in a musical written and produced entirely by Mauritians. In short, in his colourful world – be it Mauritius or elsewhere in the region – you can be certain Tikoulou still has a few more stories up his sleeve to delight us…