Port Louis is an incredible city to stroll through and soak up the vivid atmosphere as saturated colours across the spectrum compete with waves of sound for your attention.

As part of daily life in the city, busy market traders mix with wide-eyed shoppers and those making their living on the side of the old dock.

Photographer Avinash Susty was wandering through Port Louis three years ago taking some street photos for a personal assignment known as ‘365 days project’, an idea where he took a photo each day of the year. It’s here he came across the old merchant with blue eyes. 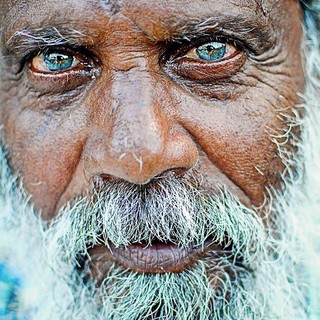 Susty said: “His blue eyes were so attractive that I could not resist to ask him if I could take his picture. He kindly agreed. I took 3 photos of him and he was happy to see the results. He was selling sunglasses and belts. So, I bought a pair of sunglasses just to show my gratitude.”

Looking for the Merchant

Susty’s photograph went on to be awarded ‘photo of year’ by Igersmauritius on Instagram.

“More importantly,” Susty said, “that photo is one of a kind because it is very rare to come across a dark-skinned person with such blue eyes. His expression was so deep. I have printed that photo to give him but I could not find him…”

The image of Port Louis is one of Susty’s favourite portraits and he said it shows, “Mauritius is not only about sandy beaches, blue lagoons but also a diversity of culture.”

The story behind the image

We are still looking for #360 images of Mauritius like the ‘Old Merchant with Blue Eyes’ to capture this beautiful island and build a unique picture of Mauritius.

You can send us your best #360 images of Mauritius through Facebook or our new Air Mauritius 360 Instagram account. Maybe one of you has a merchant that we can share or one you’re still looking to find…

For more on Susty’s photography check out his Instagram and 500px accounts. He also has a few Facebook albums here and here.