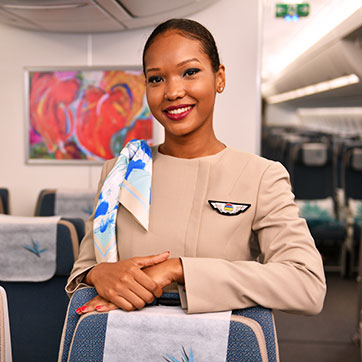 Our brand new Airbus A330-900neo is a versatile aircraft that serves both our medium and long haul routes. This aircraft is the latest addition to the Airbus twin-aisle family and is equipped with state of the art cabin that offers unprecedented levels of comfort.

The latest addition to our fleet, our A330-900neo, which came in this April, is a new generation aircraft. With the delivery of the A330neo, Air Mauritius becomes the first airline in the world to operate both the A350-900 and the A330neo.

Featuring a new high-span wing with composite Sharklet, new composite narcelle, new Rolls-Royce Trent 7000 engine and innovative cockpit systems, it has eco-friendliness built into its very DNA – it caters for up to 25% less fuel burn per seat and CO2 emissions! The A330-900neo aircraft has a similar cabin layout as our flagship A350-900 aircraft and is configured with full-flat seats in Business class, new seats in Economy class:

This aircraft is equipped with WiFi.

It also gives enviable cabin space for an exclusive inflight experience - larger bins, more personal space and the latest generation inflight entertainment system, wifi connectivity in all classes, besides being the quietest cabin in its category!

This new generation aircraft is versatile and can efficiently serve markets on sectors from as short as 30 minutes, to over 15 hours flying time – making it a true long-range capable aircraft.

We now take you through our two Airbus A330-900neo aircraft, called ‘Aapravasi Ghat’ and ‘Chagos Archipelago’ as a tribute to Mauritius’ historic heritage.

This aircraft is named Aapravasi Ghat in reference to Mauritius’ history. A UNESCO World Heritage site located in the district of Port Louis, Aapravasi Ghat is a vast 1,640 m2 site where the modern indentured labour diaspora began. In 1834, the British Government selected this area to play out the great experiment of ‘free’ labour.

Inspired by the island’s history in developing the sugar industry, our first A330neo is expected to pioneer Air Mauritius into a new threshold of efficiency and flexibility.

Our new A330-900neo aircraft pays tribute to the struggle of the Chagossian community in their pursuit to regain sovereignty over the Chagos Archipelago, which refers to a group of seven atolls comprising more than 60 individual tropical islands in the Indian Ocean.

Check our seat options and pick yours in advance.